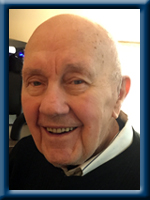 Malyk, Michael James (Jim)
Jim passed away quietly at the age of 90 on February 21, 2015. Jim was born in Poland September 22, 1924 and immigrated to Canada as a young boy with his parents Peter and Justina Malyk. The Family settled in Southern Ontario but Jim moved to Nova Scotia as a teenager. At 17 Jim enlisted in the military and served from 1942 to 1948 as a tail gunner in a Lancaster Bomber. While in the service he met the love of his life Eva Idella Seaman. They were married and settled down for good in Liverpool where they operated Malyk’s Grocery Store out of the lower level of their home for more than 40 years. Jim also loved talking with many friends around the world on his Ham Radio and repairing electronics.
Jim was a Past Master of the Masons Zetland Lodge No.9 Liverpool, NS, a member of the Philae Shriners Halifax, NS and a member of the Order of Eastern Star Arbutus #30 Milton, NS.
He was an active member of the community playing golf, curling, and attending the Zion United Church, singing in the choir for over 55 years. He loved music and volunteered by playing the organ to entertain many local seniors right up until the time of his passing.
Jim is survived by his sister Anne Holmes, Delhi ON and many nieces and nephews here in Nova Scotia, Ontario and Alberta. Jim is predeceased by his wife Eva, his brother John and his sister Mary. He will be missed by all of us but especially by his close friends Gail Hemeon and Silvia McCleave.
Cremation has taken place under the direction of Chandlers’ Funeral Home, Liverpool where a Masonic Lodge and Order of Eastern Star services will be held on Thursday, April 30th at 7 pm. A memorial service at 11 a.m. on Friday May 1st at Zion United Church in Liverpool. Reverend Sheila Redden-Smith officiating. Online condolences may be made to www.chandlersfuneral.com . The family would like to thank the people of Liverpool for supporting Jim during his later years allowing him to live a long and wonderful life in the community.

Offer Condolence for the family of Malyk; Michael James “Jim”