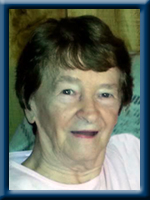 Offer Condolence for the family of Malone; Mildred Josephine “Josie”