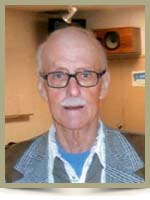 Mallett, Rudy Ernest, 74, of Mersey Point, Queens County, passed away after a 10 year battle with cancer, on Wednesday, April 3rd, 2013, in the Queens General Hospital, Liverpool.

Born in Liverpool, he was a son of the late James and Waitie (MacLeod) Mallett.

In 1956, Rudy joined the Royal Canadian Regiment (R.C.R.) as a paratrooper. He was stationed in London, Ontario before joining the Reserve Army in Liverpool in 1960. Rudy worked at Dofasco Steel Company in Hamilton, Ontario as an overhead crane operator for ten years before moving back to Nova Scotia in 1975 and building his home. He then went to work as a fisherman, fishing crab and lobster while also doing carpentry until retirement. He enjoyed whittling with a jackknife and sandpaper making many unique items out of wood. Rudy also enjoyed country and western music playing in a number of bands at many events over the years. He was a member of the Royal Canadian Legion, Mersey Branch #38, Liverpool, for many years. He was an avid Toronto Maple Leafs fan.

Cremation has taken place under the direction of Chandlers’ Funeral Home, Liverpool. The family will be receiving visitors on Saturday, April 20th, 2013, from 1:00 P.M. until 4:00 P.M. at the Royal Canadian Legion, Mersey Branch #38, Liverpool. Donations may be made to Cystic Fibrosis Canada or to the Kidney Foundation of Canada. Online condolences to the family may be made at www.chandlersfuneral.com

Offer Condolence for the family of Mallett; Rudy Ernest