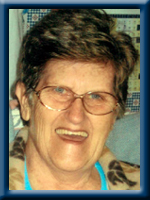 Born in North Brookfield, she was a daughter of the late George and Elsie (Herman) Baker.

Mary served as post mistress for Canada Post in South Brookfield for many years. She loved to read, take quiet walks in the woods, spending time with her family and animals. She also enjoyed politics, studying genealogy and a good game of cards.

Cremation has taken place under the direction of Chandlers’ Funeral Home, Liverpool. A graveside memorial service will be held Saturday, August 16, 2014 at 11:00 a.m. in Rosette Cemetery, North Brookfield. Family flowers only, donations may be made to North Queens Nursing Home Staff Christmas Fund or to S.H.A.I.D. Animal Shelter. Online condolences may be made to www.chandlersfuneral.com.

The family would like to acknowledge the staff of North Queens Nursing Home for their kindness and special care given to Mary while she was a resident as well as to her daughters Cheri, for her personal devotion to Mary’s care while she was in the nursing home, sometimes with great personal sacrifice, and to Wanda for her dedication. Also to Chandlers’ for their professional advice and support during a difficult time.

Offer Condolence for the family of MacQuarrie; Mary Ellen