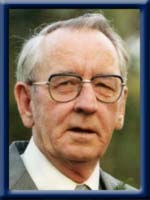 Born in College Grant, Antigonish county, he was a son of the late Rod and Christine (Stewart) MacPherson.

Rod worked in the woods in his early years then worked as a carpenter in the Pictou Shipyards. He met and married his wife Dorothy and moved to Liverpool where he sold and maintained war time homes for CMHC. Following this, he worked for G.W. Clements as a meat cutter and ran two general stores; one in Milton and the other in Liverpool.  He moved to Truro and worked as a carpenter for a time then moved back to Liverpool where he started MacPherson’s Deli which he ran until his retirement. They moved to Greenfield where he enjoyed growing vegetables, flowers and giant pumpkins. He was a member of the Liverpool Curling Club, Liverpool Golf and Country Club, K40 and the poker club in Greenfield.

Visitation will be Monday evening (October 8th, 2012) from 7 until 9 p.m. in Chandlers’ Funeral Home, Liverpool. Funeral Mass will be held Tuesday, October 9th, 2012 at 11:00 a.m. from St. Gregory’s Catholic Church, Liverpool. Father Keith Billard officiating. Burial will be in Zion United Cemetery, College Street, Liverpool. No flowers by request. Donations may be made to Queens Manor, Liverpool. Online condolences may be made to www.chandlersfuneral.com

Offer Condolence for the family of MacPherson; Roderick “Rod”