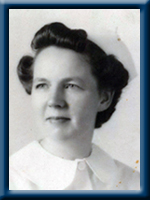 Dorothy MacPherson (Clements) of Liverpool, Nova Scotia
It is with great sadness that we announce the passing of our Mother (Dorothy) on April 4th, 2015 at Queens Manor, Liverpool.
Born in Montreal on June 18th, 1919. Dorothy was the daughter of the late George and Annie Clements.
Dorothy graduated as a nurse from the Halifax Infirmary in Halifax, N. S. She began her nursing career in Pictou where she met and married her late husband, Rod.
They returned to Liverpool where she worked as a V.O.N. , Queens General Hospital and at Fahie’s Nursing Home. Dorothy and Rod later opened and operated MacPherson’s Deli where they worked side by side until they retired and moved to Greenfield.
Dorothy loved living in Greenfield, socializing with her many friends, family and especially her grandchildren and her great grandchildren.
She will be remembered for her natural care giving as a nurse , compassion as a mother and a kind and warm heart for all her children, grandchildren and great -grandchildren.
Dorothy is survived by her daughter Christine of Liverpool, her sons Stewart (Lorna) of Bedford, Horace (Marie) of Liverpool and George (Joy-Anne) of Bridgewater and special family friend Karen Umphrey.Her grandchildren Kyle Nickerson, Allison MacPherson, Scott MacPherson, Jason (Katherine) MacPherson, Liseanne MacPherson (Catlin), Renee MacPherson, and Craig (Fiona) MacPherson. Great grandchildren Mila, Finn, Nolan and Ryder. As well she is survived by her many nieces and nephews.
She was predeceased by her husband Rod, her infant daughter Anne and her brother Horace.
A Celebration of Dorothy’s Life will be held on Friday, May 8th, 2015 at 11:00 a.m. from St. Gregory’s Catholic Church, Liverpool, followed by a reception. Father Keith Billard officiating. Burial will be in Zion United Cemetery, College Street, Liverpool. No flowers by request. Donations may be made to Queens Manor, Liverpool. Online condolences may be made to www.chandlersfuneral.com The family would like to thank Dr. Susan Thorne and all the staff of Queens Manor for their loving support and compassion.

Offer Condolence for the family of MacPherson; Dorothy Violet