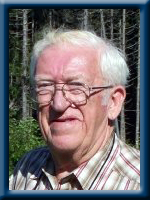 Born in Winnipeg, MB, he was a son of the late Hector and Nita (Johnson) MacLeod.

Walter was an electrician for Bowater Mersey Paper Company for many years. He was an honorary member of the Liverpool Fire Fighters Association, a member of IBEW union, served as treasurer for the Historical Society and Clan MacLeod Society. He was a life member of Mount Zion Preceptery, Zetland Lodge #9, A.F. & A.M., Liverpool, as well as a member of the Shriners.

He is survived by his stepson Glen (Carolyn) Lundrigan of Markham, ON ; step-grandchildren Michelle and David; cousin Dorothy Doran of Winnipeg, MB.

He was predeceased by his wife R. June (Feoner) (Lundrigan).

Offer Condolence for the family of MacLeod; Walter Robie