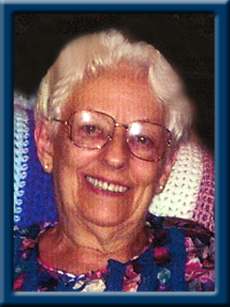 MacLeod – Rosemary Jessica, 91, of Liverpool, passed away peacefully in Queens General Hospital, Liverpool on Monday, March 20, 2017.
Born in Glasgow, Scotland, she was a daughter of the late Walter and Wilhelmina (McCallum) Opiola .
Rosemary was a long time member of the Jehovah’s Witnesses Liverpool congregation.
She is survived by her son Stanley of Liverpool; her grandchildren, John MacLeod of Milton, Mason MacLeod of Newcombville and Erica Dawn MacLeod of Halifax.
Rosemary was predeceased by her husband Stanley, infant daughter Linda Joyce.
Cremation has taken place under the direction of Chandlers’ Funeral Home, Liverpool. Funeral service will be held Saturday, April 1st, 2017 at 1:00 p.m. in Chandlers’ Funeral Chapel, Liverpool. James Longley officiating. Burial will be at a later date in Seaside Cemetery, Brooklyn. No flowers by request. Donations may be made to charity of choice. Online condolences may be made to www.chandlersfuneral.com.

Offer Condolence for the family of MacLeod; Rosemary Jessica