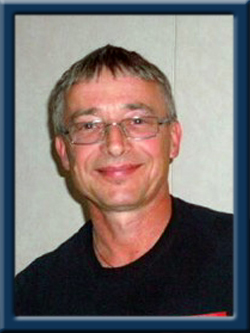 MacLEOD – Ricky A., 61, of Western Head, Queens County, passed away peacefully at home on Wednesday, August 28, 2019.
Born in Liverpool, Ricky was a son of the late Richard and Doreen (Cluett) MacLeod.
Ricky was an employee of Bowater Mersey Paper Company where he worked as a heavy equipment mechanic eventually becoming head of the Mechanical Department. He served as captain of the Bowater Mersey Fire Brigade and the rescue Hazmat Team which he took great pride in along with his colleagues. Following the closure of Bowater, Ricky began his own business, Rick’s Hydraulic Hose Service, in 2012. In his spare time, Ricky enjoyed canoeing into his favourite spot (Site 4) in the back country of Kedjimkujik to do some much loved fishing. He was also an avid hunter and enjoyed cooking for his family and friends. He was well known for his planked salmon dinners.
Ricky is survived by the love of his life, Althea “Ellie” (Wesley); his daughter Makayla (Mike Berringer) of Dover, NS. His son Christopher of West Berlin. Six step children and many step grandchildren. His sister Trina (Dave) Cowan of Caledonia and his niece Adelaide, whom he adored.
Cremation has taken place under the direction of Chandlers’ Funeral Home, Liverpool. Visitation will be from 12 noon until 2 p.m. on Tuesday, September 3rd, 2019 with a celebration of Ricky’s life being held at 2:00 p.m. all in Chandlers’ Funeral Chapel, Liverpool. Reverend Judy Cross officiating. Reception to follow in the funeral home. Family flowers only, donations may be made to the Canadian Cancer Society. Online condolences may be made to www.chandlersfuneral.com

Offer Condolence for the family of MacLeod; Ricky Allan