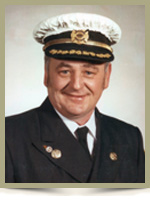 Born in Milton, he was a son of the late Marguerite (MacDonald) and Donald MacLeod.

He was a loving husband, father, grandfather and friend. Richard started working at the age of 13 with his father at the family garage. He worked there for 28 years while also driving school bus. He then went to work for the Bowater Mersey Paper Co. for the next 15 years, retiring as fire chief of the mill. Richard served in the Liverpool fire department for 32 years, spending a number of years as chief. He was a lifetime member of the Maritime Fire Chiefs Association. He was the founder of the Liverpool Junior Fire Department and also helped to pass legislation for benefits for members of volunteer organizations. Richard was a huge fan of the Toronto Blue Jays and in his spare time he enjoyed trucking with Arthur DeMone. In his later years he enjoyed being a snowbird, spending 19 years camping in Florida, and camping with his friends at Seabreeze FCRV.

He was predeceased his brother Phillip.

Visitation will be held from 7:00 – 9:00 P.M., Saturday, August 20th, 2011, at Chandlers’ Funeral Home, Liverpool. A Funeral Service will be held Sunday, August 21st, 2011, at 3:30 P.M., from Trinity Anglican Church. Reverend Donald Lawton and Reverend Judy Cross officiating. Family flowers only. Donations may be made to Queens General Hospital Foundation. Online condolences may be made to the family at www.chandlersfuneral.com

Offer Condolence for the family of MacLeod; Richard Allan