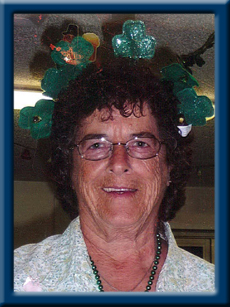 MACLEOD – Doreen A., 79, of Milton, Queens County, passed away peacefully in Queens General Hospital on Monday, January 22, 2018.
Born in Liverpool, she was a daughter of the late Manuel and Helen (Whynot) Cluett.
In her younger years, Doreen worked at Danny Seaman’s store. She was also a private seamstress working from her home. Doreen worked at Woodlands Conference Centre of Bowater Mersey Paper Company Limited in Brooklyn, N.S as well as the Mersey Lodge. Doreen, along with her friend, Deanna Veinot, ran a private catering business. Doreen was also a member of the Ladies Auxiliary, Liverpool Fire Department where she spent many tireless hours volunteering. She was an active member of Trinity Anglican Church and the A.C.W., Queens General Hospital Auxiliary Gift Shop and Queens General Hospital Hustle. She, along with her late husband, Richard, spent many years travelling to their second home in Florida.
She is survived by her daughter Trina MacLeod (David Cowan) of Caledonia; son Ricky (Althea) of Western Head; grandchildren Christopher, Makayla and Adelaide; sister Erma (Roger) Wright of Dartmouth; brothers Garnett (Eleanor) of Charleston, Murray (Janie) of Brooklyn.
Predeceased by her husband Richard and brother Lyman.
Cremation has taken place under the direction of Chandlers’ Funeral Home, Liverpool, NS where visitation will be held Sunday, January 28, 2018 from 7 until 9 p.m. Funeral service will be held Monday, January 29, 2018 at 2:00 p.m. from Trinity Anglican Church, Liverpool. Reverend Cherry Workman officiating assisted by Reverend Judy Cross. No flowers by request, donations may be made to the Trinity Anglican Church. To share memories or condolences, please visit www.chandlersfuneral.com

Offer Condolence for the family of MacLeod; Doreen Alberta