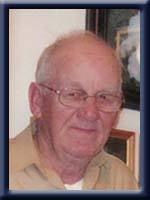 MacLeod, Daniel Frederick, 78, of Liverpool, Queens County, passed away on Tuesday, November 29th, 2011, at home.
Born in Liverpool, he was a son of the late William and Arlene (McLeod) MacLeod.
Dan joined the Royal Canadian Air Force right out of school spending five years in the service before moving back home and going to work for Berwick Bakery. Following his employment with the bakery, Dan went to work with Dominion Stores where he became store manager then moved on to TRA. Dan then went to work at Stenpro in the machine shop, retiring in 1998. He loved hunting, fishing, playing cards and working in his garden.
He is survived by his loving wife, Joyce (Oickle); daughters Myra (Leslie) Foley, of Lafayette, Louisiana, Katherine MacLeod-Tucker (Barry Tucker) , of Coldbrook; son Peter MacLeod (Dennis Wyatt), of North Vancouver, B.C. ; sister Helen Roberts, of Liverpool; brothers Jack (Ellen), of Milton, Bruce (Judith), of New Brunswick; and four grand dogs.
He was predeceased by a sister Mary; brothers Robert and Maurice.
Cremation has taken place under the direction of Chandlers’ Funeral Home, Liverpool. A Celebration of Dan’s Life will be held on Tuesday, May 22nd, 2012 at 11:00 a.m. in Trinity Anglican Cemetery, Bog Road, Liverpool. Reverend Judy Cross officiating. No flowers by request. Donations may be made to a charity of your choice. Online condolences may be made to the family at www.chandlersfuneral.com

Offer Condolence for the family of MacLeod; Daniel Frederick