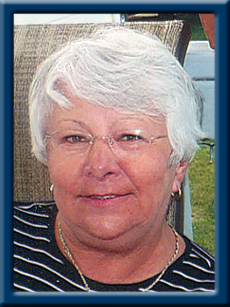 The family of Phyllis Ann MacLean, of Charleston, sadly announce her passing at the Queens General Hospital, Liverpool on Tuesday, January 2, 2018 after a seven year battle with dementia.
The only child of Percy and Annie (LaRose) Moore, Phyllis was born in Watrous, SK and grew up in Welby and Spy Hill SK.
After finishing school in Spy Hill and Langenburg, SK, she attended Brandon Business College where she earned a diploma in Business Administration. She then moved to Regina, SK where she met her new best friend and future husband, Phil MacLean. They then moved to Alberta, first to Three Hills and then to Calgary where their son Steve was born. They then moved to BC, first to Richmond where their second son, Neil, was born and then to Coquitlam, Mission, Prince George and Chilliwack. After retirement in 2000, they moved to their dream home on the banks of the Medway River in Charleston, NS. Besides being a full time mum, Phyllis worked as an executive secretary, legal secretary, data entry clerk and retirement village administrator in the various communities where she lived. Over the years, she volunteered with the Boy Scouts, Royal Canadian Air Cadets, Canadian Cancer Society and the Royal Canadian Legion. She loved spending time camping in the many provincial parks in BC hiking many wilderness trails and travelling across Canada in their truck and camper. However, she was happiest sitting as a passenger on the back of a motorcycle travelling the highways and byways of Canada and the U.S. from coast to coast in every type of weather imaginable and where her main job was navigator and speed controller. After retirement to Nova Scotia, she spent her time puttering in the garden, riding the motorcycle and indulging in her previously unknown talent for furniture refinishing.
Phyllis leaves to mourn her husband of forty eight years, Phil; son Steve and daughter in law Rhonda and grandchildren Cameron, Justin and Erynn of Port Moody, BC and son Neil and partner Jennifer Bell of Trenton, ON as well as friends across Canada.
Cremation has taken place under the direction of Chandlers’ Funeral Home, Liverpool. A memorial service will be held Tuesday, January 16, 2018 at 2:00 p.m. in Chandlers’ Funeral Chapel, Liverpool. Reception to follow. No flowers by request, donations may be made to the Alzheimer’s Society, Hope For Wildlife or charity of choice. Online condolences may be made to www.chandlersfuneral.com. The family would like to thank Trudy and Gary Connick of Bridgewater and Cathy Pincombe and Ray Leger, Bernie and Margaret Swain and Donna and Edward Anthony, all of Mill Village, NS for their continual support over the last several years as her illness progressed. Also a thank you to everyone at the Royal Canadian Legion Br.#24, Bridgewater and a special thank you goes out to Dr. Gary Ernest and the staff of Queens General Hospital, Liverpool for the compassionate care they gave Phyllis especially over the last few months of her life.

Offer Condolence for the family of MacLean; Phyllis Ann