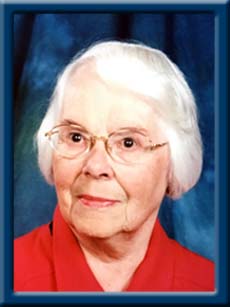 MacKenzie, Marjorie, Elizabeth – 94, Liverpool, NS
The family of Marjorie MacKenzie is saddened to announce that she passed away, at home, on Tuesday, July 11, 2017.
Born in Lapland, Lunenburg Co., she was the oldest child of Byron and Gladys (Bolivar) Zwicker.
Initially educated in a one room school in Lapland, then completing her high school diploma by correspondence, she attended the provincial Normal College in Truro graduating as a teacher in 1944. She began her teaching career in Lower Branch LaHave, back in a one room school setting. After several years teaching in rural schools, she accepted a position with the Liverpool school system where she taught various elementary grades.
Living in Liverpool she met and married Arthur MacKenzie, a professional engineer at Bowater Mersey Paper Co. She left teaching to concentrate on raising her family. When her children were older, she returned and continued to teach until her retirement.
A long time member of the Liverpool United Baptist Church congregation, she was always active in church activities and woman’s groups, leading devotions and various programs through the years. She is remembered by many for her contributions to church social life always ready to perform one of her signature skits. In retirement years, she took a leadership role with the Senior Woman’s Missionary Society as Vice-President and President through the 1990’s and 2000’s.
Marjorie was also active in the Gorham Chapter of the IODE, eventually serving as Regent and Secretary for several years. She was elected as a delegate to several provincial and national IODE conferences travelling across Canada to represent the local chapter.
Revered by family, neighbors and friends she spent her later years quietly at home.
Marjorie is survived by her children Robert, Toronto, Susan, Ottawa, and grandchildren Nicole, Graeme, Rachel and Alexander.
She was pre-deceased by her husband of 50 years Arthur, brother Kenneth, Bridgewater and sister Marion (Spicer) Bridgewater.
No visitation by request. Funeral services will be held in Liverpool United Baptist Church on Sunday, July 16 at 2 PM. with Reverend Richard Bristo officiating. A private internment will be held in the United Baptist Church cemetery. In lieu of flowers, donations may be made to the Liverpool United Baptist Church. On-line condolences may be made to www.chandlersfuneral.com

Offer Condolence for the family of MacKenzie; Marjorie Elizabeth