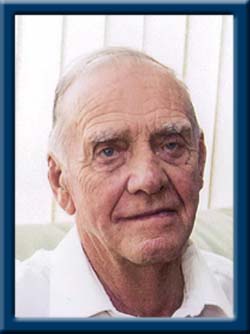 MacKAY – Willard Frank, 79, of Brooklyn, Queens County, passed away peacefully at home on Friday, November 27, 2015.
Born in Brooklyn, he was a son of the late Willard and Edith (Pierce) MacKay.
Frank worked for the former Bowater Mersey Paper Company Limited for 38 years retiring in 1994 as Beater Engineer. He fished lobster since he was 15 years old and was a founding member of the Brooklyn Marina. He enjoyed sports; pitching softball with the Brooklyn Comets, bowling, horseshoes and washer toss. He was well known for his step-dancing and performed on the local CCF Telethon for over five years with his friend Clayton Fralic as his musical accompaniment. He enjoyed meeting and chatting with people whether it was in the local grocery store, on the wharf or simply in his yard, especially at “happy hour”. He will be remembered by his family and those who knew him well as honest, hardworking and trustworthy.
He is survived by his wife Janet (Smith); his daughters Patti Ann (John) Blimke of Italy Cross; Shelley (Richard Joudrey) of Rhodes Corner; his sons Frank (Susan) of Beach Meadows; Derek (Shayne) of Hammonds Plains. Grandchildren Robert MacKay; Sherree MacKay; Jean Claude Foster and Kevin Blimke; great grandchildren Emma Whynot, Sydney Whynot and Gabriel Foster.
He was predeceased by his sisters Ruby Cross and Florence Beeler; his brothers Donald, Archie and Everett.
Cremation has taken place under the direction of Chandlers’ Funeral Home, Liverpool. Funeral service will be Saturday, December 19, 2015 at 2:00 p.m. in Chandlers’ Funeral Chapel, Liverpool. Lay Minister Peter Anthony officiating. Reception to follow. Family flowers only, donations may be made to the Brooklyn Marina, QRBA, c/o: Paul Shot, 382 Brooklyn Shore Road, Brooklyn, NS B0J-1H0. Online condolences may be made to www.chandlersfuneral.com

Offer Condolence for the family of MacKay; Willard Frank