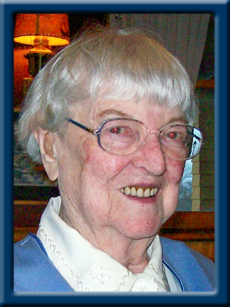 The family of Edna MacKay, of Liverpool NS, sadly announces her passing on Tuesday November 6 at the age of 96. She was a beloved sister and aunt, who will be mourned by her sisters Mona Ellis of Bedford and Maxine Stewart of Windsor Elms Village, and her four nieces Marilyn Ray (Penticton BC), Gloria Gilbert (Osborne Harbour NS), Nanci Heninger (Calgary AB), and Susan Calnen, (Elmsdale NS). She is also survived by three more generations of nieces and nephews.
Edna was born in Caledonia, Queens County, NS on March 8 1922, second daughter of Beulah (Freeman) Murray, and Henry Clark Murray. Edna was proud to be a direct descendant of Mayflower pilgrims.
During her married life, Edna enjoyed living on many military bases throughout Canada, and in Germany. She was a great traveler, and made many lasting friendships on the way.
Edna was always a great source of historical information regarding our family, and the North Queens area. She was a dedicated NASCAR fan. She always enjoyed doing crossword puzzles, and cryptoquotes in the daily paper, watching Jeopardy, reading, and doing jigsaw puzzles, among other mentally challenging pursuits.
Edna was a great lover of cats, and had many feline pets during her life. They are all sure to be waiting to greet her in heaven.
In keeping with her wishes, cremation has taken place under the direction of Chandler’s Funeral Home, Liverpool. Private interment in the Murray family plot Highland Cemetery, Caledonia, Queens County at a future date. There will be no visitation, or service. Online condolences may be made to www.chandlersfuneral.com.
Special thanks go out to cousins Gary and Janet Hartlen, neighbours Robin and the late Doug Sperry, and family friend Marie Macleod, who provided support during Edna’s declining years. We also appreciate the patient, gentle care provided by her Home-Support workers in Liverpool.
Edna spent her final years in Harbourview Haven (Lunenburg) and WhiteHills
Long Term Care Centre (Hammonds Plains). The kind and diligent care she received is deeply appreciated by her family.
Donations in Edna’s memory will be welcomed by:
S.H.A.I.D Tree Animal Shelter
100 High Street, Suite 138
Bridgewater, NS B4V 1V9
or
North Queens Heritage House Museum
P.O. Box 88
Caledonia, NS B0T 1B0

Offer Condolence for the family of MacKay; Edna Inezella