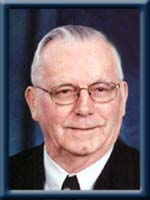 MACKAY, Charles William – 82, Liverpool, NS. It is with great sadness that we announce the peaceful passing of our husband, father and grandfather on November 25th, 2012, at home, with his wife by his side.

Born in Bridgewater in 1930, he was the son of the late Ralph and Daisy (McLean) MacKay.

Charles worked for Chandlers’ Funeral Home for 3 years and then the NS Liquor Commission for 23 years before retirement. He was a member of the Liverpool Baptist Church since 1964 where he served as deacon, trustee, usher and was part of the cemetery committee. Charles was also a Scout Leader for many years and enjoyed his summers at the family cottage on Harmony Lake. He will be fondly remembered  as a devoted husband, loving and patient father and a beloved, devoted grandfather to each of his grandchildren and has left behind great life lessons and values.

He is survived by the love of his life, his wife of 53 years Enid (Hartlin). His daughter Kirsten MacKay (Sifton Mosher) of Eastern Passage; son Duane (Anne) of  Milton. He will be sadly missed by his pride and joys of his life, his granddaughters Hannah & Morgan, his grandson Casey and his “adopted” grandson Matthew Blackler.

Charles is also survived by many nieces and nephews.

He was predeceased by his sister Helen and brothers Frank, Harold, Kenneth, Robert, Laurie and Aubrey.

Cremation has taken place under the direction of Chandlers’ Funeral Home, Liverpool where visitation will be Wednesday, November 28th from 7 until 9 p.m.. Funeral service will be Thursday, November 29th, 2012 at 11 a.m. in the Liverpool United Baptist Church. Reverend Steven Hopper officiating. Interment to follow at Lake View Cemetery, Pleasant River. Family flowers only, donations may be made to the Liverpool United Baptist Church  or charity of choice. Online condolences may be made to www.chandlersfuneral.com

Offer Condolence for the family of MacKay; Charles William