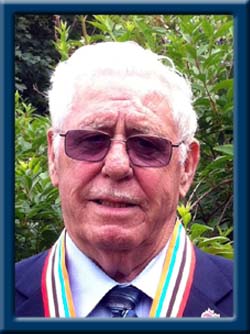 MacINTYRE – Norman Elwell “Cork”, 83, of Labelle, Queens County, passed away peacefully in Queens General Hospital, Liverpool on Tuesday, November 17, 2015 with family by his side.
Born in Blackville, NB, he was a son of the late George Duncan and Sydney (Wood) MacIntyre.
“Cork” attended Blackville Junior High school until the age of 14 when his father died and went to work in the lumber camps as a cook, teamster, cutting pulp wood, working on trucks, painting bridges, picking potatoes and laying steel for the railway. In 1949, at the age of 17 and a half, Cork joined the Royal Canadian Navy. He served on HMCS Iroquois during the Korean Conflict and saw action when the ship was hit by artillery fire. Cork served on various ships during his career, such as HMCS Ontario, HMCS Portage, HMCS Penetang, HMCS Outremont, HMCS LaHulloise, HMCS Provider, HMCS Fraser, HMCS Annapolis, and HMCS Yukon. After 25 years at sea, Cork retired in 1975 and began another 20 year career with Canada Post. After his second retirement, he spent time in Florida where he trapped wild pigs and enjoyed hunting and fishing. He and Shirley returned to Nova Scotia and settled in Labelle where he worked for various families doing general maintenance and yard work. In keeping with his naval career, his son Terry served with the Royal Canadian Navy for 20 years and his son Jerry is currently serving his 37th year with the Canadian Coast Guard. Cork became his daughter Cheryl’s own personal fishing guide, showing her all the best places to cast a line.
He is survived by his wife of 63 years Shirley (Gallant); his daughter Cheryl Gillam (Tommy Singer) of Shubenacadie; his sons Terry (Cheryl) of Nine Mile River; Jerry (Margaret) of Lake Echo. Grandchildren Shawn (Tina), Lee-Anne (Jeff), Mandee (Scott), Troy, Jennie (Alex), Jaime, Stephanie (Darrell), Michelle; great grandchildren Trent, Sawyer, Sarah, Mason, Lily, Brianna, Tristin, Jon and Regan. His sister Elizabeth “Betty” Conners of Ottawa and many nieces and nephews.
He was predeceased by his brothers George and Tom.
Cremation has taken place under the direction of Chandlers’ Funeral Home, Liverpool. Funeral service will be Saturday, November 21, 2015 at 11:00 a.m. in Greenfield United Baptist Church. Pastor Tom Davidson and Pastor Wade Harvey officiating. Reception to follow. No flowers by request, donations may be made to the Greenfield United Baptist Church or the Canadian Cancer Society. Online condolences may be made to www.chandlersfuneral.com

Offer Condolence for the family of MacIntyre; Norman Elwell “Cork”