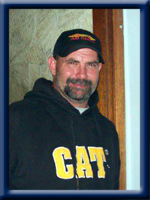 Born in Lunenburg, he was a son of Mary “Catherine” (Wolfe) MacEachern and the late Thomas Andrew MacEachern.

Wayne worked for the Region of Queens for many years as a heavy equipment operator, Cat being his brand of choice. He was affectionately known by his friends by the nicknames “Bub” and “Dash”. He enjoyed the local racing scene and could often be seen at the drag races in Greenfield or at the Liverpool Off Road Racing Track. He was an avid dart player, playing in two local leagues and many tournaments. Wayne also enjoyed watching hockey and baseball. He had a soft spot in his heart for all animals.

He was predeceased by his birth father, Wayne Reeves Sr., sister, Darlene.

Visitation will be held on Sunday, January 4th, 2015, from 7:00 – 9:00 p.m., at Chandlers’ Funeral Home, Liverpool. A Celebration of Wayne’s Life will be held at 11:00 a.m., on Monday, January 5th, 2015, from St. Gregory’s Catholic Church, Liverpool, followed by a reception. Father Keith Billard officiating. Burial will be in the Western Shore Cemetery. Family flowers only. Donations may be made to St. Gregory’s Catholic Church. Online condolences may be made to the family at www.chandlersfuneral.com

Offer Condolence for the family of MacEachern; Wayne Douglas