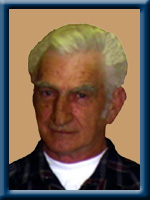 Born in Liverpool, he was a son of the late John R. and Catherine “Annie” (Gillis) MacEachern.

John was a carpenter by trade. He was employed with  Mosher and Rawding and spent several years building beautiful homes throughout Queens County., before going to work with  Bowater Mersey Paper Company as a carpenter/millwright. Johnny enjoyed spending quality time with his children and grandchildren, hunting with his buddies Tommy, Ray and Danny and helping his children and dear friend Kenny complete repairs on their homes. John enjoyed visits and telephone calls with Leanne and Peter Cole, our dear Aussie friends.

He was predeceased by his brother Thomas.

At John’s request, his body has been donated to medical research. A celebration of his life will be held June 19th, 2010 at 2:00 p.m. at the Union Hall in Brooklyn. In lieu of flowers, donations may be made to IWK/Grace Foundation, The Salvation Army or the Childrens Wish Foundation.  Online condolences may be made to www.chandlersfuneral.com

Offer Condolence for the family of MacEachern; John Dougal