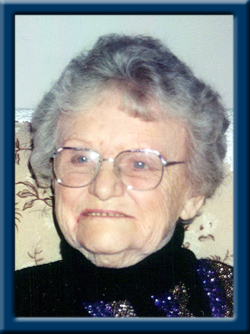 MacDOUGALL – Verna L., 99, of Liverpool, Queens County, passed away peacefully in Queens General Hospital, Liverpool on Thursday, December 1, 2016.
Born in Liverpool, she was a daughter of the late George and Susan (Whynot) Whynot.
Verna was a seamstress who worked from her home doing alterations for many people in Liverpool and for Max Harding’s Men’s Wear. She also worked in her brother’s convenience store from time to time. She will be fondly remembered for her love of math and church rummage sales.
She is survived by her daughter Karen Whynot of Liverpool; her son Hugh (Irene) of Liverpool; her daughter in law Diane MacDougall of Western Head; 8 grandchildren, 9 great grandchildren and 2 great great grandchildren.
She was predeceased by her husband Roy; her son Brian; her sisters Thelma, Elsie, Ellie, Esther, Vallie and Vera and her brothers Ray, Floyd, Perry, Aulton, Mark and Laurie.
Cremation has taken place under the direction of Chandlers’ Funeral Home, Liverpool where funeral service will be held Wednesday, December 7, 2016 at 11:00 a.m. Reception to follow. A private family interment will take place at a later time. Family flowers only, donations may be made to Queens General Hospital Foundation or to a charity of your choice. Online condolences may be made to www.chandlersfuneral.com

Offer Condolence for the family of MacDougall; Verna Louise