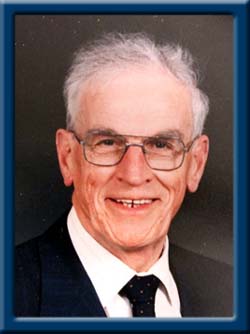 MacDONALD – Joseph Leonard “Len”, 89, of Bridgewater, passed away peacefully in Queens General Hospital, Liverpool on Sunday, November 29, 2015 surrounded by his family.
Born in Sydney Mines, Cape Breton, he was a son of the late Edward and Elizabeth (Walke) MacDonald.
Len had a long career with National Defense and Parks Canada in purchasing and supply. He had been a member of the Sydney Mines Fire Department. He became an avid birder and put much time and energy into documenting the family tree. Len loved sharing his time with children, and in later years, called himself “the grandpa on the block”. Genial and gracious with everyone, Len was a good-natured example to all who knew him.
He is survived by his wife Patricia (MacDougall); his sons Gary (Janette) of Ottawa, ON; Peter of Calgary, AB; grandchildren Alexandra, Mark and Brennen; his brothers David (Ruth) of Toronto, ON; Ralph of Toronto, ON; Terrance (Marie) of London, ON.
He was predeceased by his infant daughter Barbara Lynn; his sisters Veronica, Theresa, Frances, Edna, Mary, Bernadette, Beatrice, Alberta and Eileen; brothers Charles and Aubrey.
Cremation has taken place under the direction of Chandlers’ Funeral Home, Liverpool, NS. There will be no visitation. Funeral mass will be held Friday, December 4, 2015 at 11:00 a.m. in St. Joseph’s Catholic Church, Bridgewater. Burial will be in Cape Breton, alongside his daughter, at a later date. No flowers by request, donations may be made to a charity of your choice. Online condolences may be made to www.chandlersfuneral.com

Offer Condolence for the family of MacDonald; Joseph Leonard “Len”