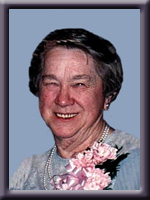 Service date and time have been confirmed for Evelyn MacAdams

Born in Sandy Bay, Queens County she was a daughter of the late H. “Mack” and Frances (Shultz) Leslie.

Evelyn was a former teacher in Shelburne County and also served as a postmistress in Port l’Herbert. She was a clerk for the former Metropolitan Store in Liverpool for a number of years. She was a member of Wesley United Church in Hunt’s Point  as well as the U.C.W. She was a member of Queens Chapter #34, Order of Eastern Star, Crescent Chapter #70, Order of Eastern Star, Lockeport and the Sable River Women’s Institute.

She is survived by her husband Glenn; her son Linwood (Barbara) Wolfe, of Wasaga Beach, ON.  Grandchildren Richard Wolfe and Karen Wolfe and great grandchildren Tiffany, Evan, Grace and Hannah.

She was predeceased by her first husband Melbourne Wolfe and her brothers Harley and Eugene.

Cremation has taken place under the direction of Chandlers’ Funeral Home, Liverpool. A funeral service will be held Tuesday, February 8th, 2011 at 2:00 p.m. from Wesley United Church, Hunt’s Point. Reverend Bethe Benjamin-Cameron officiating. Burial will be in Oceanside Cemetery, Hunt’s Point. No flowers by request. Donations may be made to any charity. Online condolences may be made to www.chandlersfuneral.com

Offer Condolence for the family of MacAdams; Evelyn Trevain