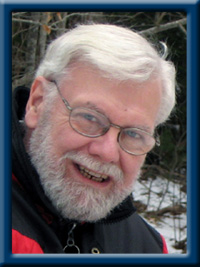 The family of Larry W. Lowe wish to announce that after a long battle with Parkinson’s Disease, Larry has passed away in Queens Manor Nursing Home, on February 1st, 2021. Although we grieve our loss, we rejoice in the knowledge that Larry is now with his Lord and Savior, Jesus Christ, whom he loved so much.

Larry was born in Caledonia Cottage Hospital on February 26th, 1948, the son of Henry Arthur Lowe and Audrey Xina (Frail) Lowe and grew up in Westfield, Queen’s County, along with an older brother (Robert Glenwood Lowe) and many other family relatives nearby.

Larry worked at a variety of jobs during the course of his life, but most of his years were spent in the insurance business, both in sales and administrative positions. In 1980, Larry, Lynn and family decided to move back to the Liverpool, N.S. area once again – this time to take on the challenge of building Larry’s own Insurance Brokerage, ‘Larry Lowe & Associates’. Larry enjoyed working with people and was well liked by the countless number of clients that he had the privilege to serve during those years, and their children, who always looked for the bowl of candy that he always kept on his desk, in a place where they could reach it.

Larry was proud of his Mi’kmaw ancestry and was a member and elder of the Native Council of Nova Scotia. He was also a member of the Salvation Army and devoted countless hours of volunteer service to them over the years. He was one of the founding members of the local interdenominational ‘Christian Men’s Fellowship Group’ that met every second Saturday morning for breakfast and a time of praise and prayer.

Larry served as a Commissioner of Oaths for the Province of Nova Scotia, had his real estate License, as well as being a former Cub leader.

At home he enjoyed doing simple things, such as wood carving, tole painting, making pizzas and baking Christmas cookies. He was a man who will be remembered for the love that he had for his family.

Cremation has taken place under the direction of Chandlers’ Funeral Service, Liverpool. Due to the second wave of Covid, the ‘Celebration of Life’ service will be held at a later date at the Liverpool Salvation Army, followed by a reception, once health restrictions relax and the weather gets better. No visitation by request (extended family members will be notified of the date and time).

Larry’s family would like to extend a huge “thank you” to all the staff at Queens Manor, who not only provided Larry with excellent care during the time that he was a resident there, but also went out of their way to provide him with lots of interesting activities, while he was still able to participate in them, as well as provide love and comfort for Larry during the last stages of his illness, especially during the Covid lock-down, when his family was not able to be there with him.

Donations may be made to the Liverpool Salvation Army Community Church, Queens Manor Nursing Home, or directly to the family to help with the cost of the funeral, burial and headstone.

“Thank you and may God bless each and every one of you.” –  Lynn and Family

Offer Condolence for the family of Lowe; Larry Wayne