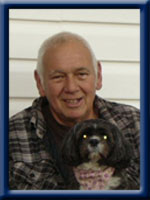 Lowe, Gary Gilbert, age 68, of Milton, passed away on Saturday, April 2nd, 2016, in the Queens General Hospital, Liverpool, with his loving family by his side.

Born on May 4th, 1947 in Milton he was a son of the late Cecil and Genevieve (Glode) Lowe.

Gary was an active member of the Acadia Band and was well known as “Uncle” throughout the Mi`kmaq  community. In his youth he placed 2nd in the Indian Summer Games in Eskasoni in canoeing in the early 70’s. He was an avid trapper, hunter (loved hunting at the Haunted Bog) and fisherman in his earlier days.

Gary retired from the Bowater Mersey Paper Company where he worked for 37 years. After retirement he spent his time lobstering in Yarmouth for 10 years. He also enjoyed his yearly 3 to 4 month vacation in Cape Breton moose hunting.

His hobbies included cribbage, backgammon, Word Search puzzles and picking cranberries in the fall and giving them to people who wanted them. He was rarely seen without his companion Annie, his pet dog who predeceased him in 2014. Gary looked forward to his occasional visits across the street to visit his brother Eric’s shed.

Gary was a respected member of the community and was well thought of by his family, friends and peers. He will be greatly missed.

Cremation has taken place under the direction of Chandlers’ Funeral and Cremation Service, Liverpool. A private service will be held at a later date. No flowers by request. Donations may be made to the Canadian Cancer Society. To share memories or condolences, please visit www.chandlersfuneral.com

Offer Condolence for the family of Lowe; Gary Gilbert