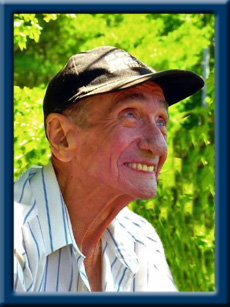 Longmire – James “Jim” Ritson Sr, aged 84, of Milfrod, Annapolis Co., died peacefully at Queens General Hospital in Liverpool, NS.
Jim was the son of the late Kendall and Beulah (Weir) Longmire.
Jim enjoyed watching sports, especially NASCAR and football, and was a lifelong fan of the Toronto Maple Leafs. He was an enthusiastic outdoorsman and enjoyed hunting and flyfishing and going on backwoods trips with his friends, around the woods and waters of his family home in Milford, Anna. Co. He also enjoyed gardening, cutting firewood on the family woodlot in Victory, league bowling, CB camp-outs, snowmobiling, and social events like dances, parties and cribbage tournaments.
Jim worked as a machinist and draftsman, and ran his own woodworking businesses in the Valley and at his Milford home. He was a perfectionist and took pride in the quality of his work. He renovated the old family home himself.  Jim enjoyed Christmas and always passed the gifts out on Christmas morning to his family.
He is survived by his children James “Jamie” (Kathi Peterson) Longmire, Faye (Brian) Swinemar, Karen (Kerry Oickle) Longmire, Bradley (Terri) Longmire and Kendall Longmire. Grandchildren, Cory (Jessica Vey) Hiltz, Andrew Hiltz, Amanda Swinemar, David Longmire, Kevin Swinemar and Hannah Longmire. Great-granddaughter, Grace Hiltz. Sisters, Anna Beeler and Peggy (Clem) Ford. Nieces and nephews. Step-son Andre (Helene Monfette)Tessier. Grandchildren, Jean Francois Levasseur and Sam Tessier. Former wife, Avon Longmire
He is predeceased by his beloved wife Nicole Metivier Longmire, brothers, Ray Weir and Donald Longmire, nephew John Beeler and step-daughter Lynn Tessier.
Cremation has taken place under the direction of Chandlers’ Funeral Home, Liverpool, NS. At James’ request, there will be no funeral service at this time. Online condolences may be made to www.chandlersfuneral.com
Special thanks to the medical staff at Queens General Hospital and Yarmouth Regional Hospital for the compassionate care shown to Dad in his last days.

Offer Condolence for the family of Longmire; James Ritson Sr.