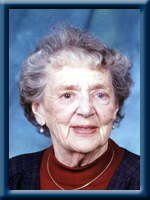 Lohnes, Verna May, 97, of Liverpool, Queens County, passed away peacefully on Sunday, August 17th, 2014, at home. Born in Bridgewater on January 26th, 1917, she was a daughter of the late James Bennett and Esther (Creaser) Nauss. She was predeceased by her husband, Oreion Lohnes, on May 23, 1993. Following the war, Verna and Oreion moved to Liverpool, where they owned and operated the Worthmore Store for many years. She was a member of Zion United Church and a long time member of the IODE and Business and Professional Women’s Club. An avid golfer and bridge player, she continued playing both into her later years. She is survived by her sister, Marie Silver, Mahone Bay; daughters, Judy Waters,(Ron Waters, previously deceased on May 4th, 2013) and Cathy Duguay (Larry); grandchildren, Karen Waters, Kevin Waters, Nikki Duguay, and Dani Duguay; great-grandchildren, Jonah, Sheldon, Kane, and Drake Waters and Blake Maillet. She was also predeceased by her sisters, Mini Parks, Jean Demone, Muriel Knickle; brothers, Murray, Russell, Frederick, Clarence, Charles, and Ronald Nauss. A Celebration of Verna’s Life will be held on Sunday, September 7th, 2014, at 2:00 p.m., from Chandlers’ Funeral Home, Liverpool, followed by a reception. Reverend Sheila Redden-Smith officiating. Burial will be in Zion United Church Cemetery, College Street, Liverpool. In lieu of flowers, donations may be made to the Edmonton Downs Syndrome Society, Zion United Church, Queens General Hospital Foundation or to a charity of your choice. Online condolences may be made to the family at www.chandlersfuneral.com

Offer Condolence for the family of Lohnes; Verna May