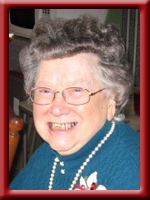 LOADER – Netta A.,  84, of Queens Manor, Liverpool, formerly of Brooklyn, Queens County, went home to be with her Lord on Tuesday, December 21st, 2010 with her family by her side.

Born in Petites, NL, she was a daughter of the late Patrick and Sarah (Courtney) Collins.

At the age of 19, Netta attended the Maritime Bible Institute in Truro and later joined the Eastern Pentecostal Bible College in Peterborough, ON. She, along with her late husband Wilbur, served over 50 years in the ministry with the Pentecostal Assemblies of Canada in various communities such as Queensway Cathedral, Toronto for 12 years, Thedford, ON for two years followed by their move to the Maritimes where they served throughout in Lockeport, Halifax, Glace Bay, Bathurst, Hartland, Liverpool and Woodstock until their retirement.

Visitation will be Monday, December 27th, 2010 from 7 until 9 p.m. in Chandlers’ Funeral Home, Liverpool. Funeral Service will be held Tuesday, December 28th, 2010 at 2:00 p.m. in Highway Pentecostal Assembly, Brooklyn. Pastor Fred Carr officiating. Burial will be in Seaside Cemetery, Brooklyn. Family flowers only, donations may be made to Highway Pentecostal Assemblies or the Salvation Army. Online condolences may be made to www.chandlersfuneral.com

Offer Condolence for the family of Loader; Netta Alice