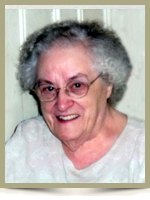 Born in Halifax, she was a daughter of the late William and Florence (Smith) Lacey.

As a young woman, Mary worked at the Moirs Chocolate factory before returning home to raise her family as her children were the most important part of her life. In later years, Mary owned and operated the Glen Margaret Canteen and General Store on the Peggy’s Cove Road. Her dedication and love for her customers and the business all combined to make Mary a much respected business woman. No better fish and chips or hamburgers could be found! Mary closed her store to work at Nautel Electronics until she retired at age 65. Here, she made friends and was an inspiration with work ethic and kind deeds.

Mary was always independent and never complained. It was with great dignity that she entered Queens Manor for the last years of her journey on this earth. To her, the staff became an extended family, and the Manor became her home. She especially enjoyed pub night and helping new residents feel welcomed.

Mary is survived and greatly missed by her daughters; Sharon (Faread) Farrah, Seabright, Gail (Bernard) Hemeon, Milton, her son Philip, Halifax. Her sisters Millie McLeod, Lower Sackville, Shirley Falkenham, Woodville. Also mourning her passing are her grandchildren, great grandchildren and several nieces and nephews who meant so much to her as well as a very special friend, Anne Zwicker, who Mary always thought of as another daughter.

She was predeceased by sisters Susan, Florence “Posie” , Gweneven and brothers Tom and Harold.

Cremation has taken place under the direction of Chandlers’ Funeral Home, Liverpool. In keeping with Mary’s wishes, there will be no visitation or funeral service. A private graveside memorial service will be held at a later date. Donations may be made to Queens Manor Auxiliary, Liverpool or to the Alzheimer’s Society of Nova Scotia. Online condolences may be made to www.chandlersfuneral.com

The family would like to extend a special thank you to all the staff and volunteers at Queens Manor. Your loving care and kindness will never be forgotten. Also, thank you to Dr. Woodford for his kind and attentive approach over the last eight years.

“Sometimes you have to stop worrying, wondering and doubting. Have faith that things will work out. Maybe not how you planned, but just how it’s meant to be.”

Offer Condolence for the family of Lively – Mary Rosaline