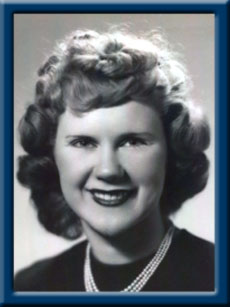 LEWIS – Ruth E., 89, of Liverpool, passed away in QE II, Halifax on Thursday, November 9, 2017.
Born in Sydney Mines on December 30, 1927, Ruth was the second youngest of 12 children of the late Robert and Mary Ann (Sexton) Mouland.
When Ruth was a very young child, the family moved to Sherbrooke, Quebec. Ruth always spoke highly of her years in Sherbrooke, of ice skating on the canals and skiing on the nearby mountain slopes with her brothers. A s a young lady, she followed her older sisters back to Nova Scotia where she met the love of her life, Cecil G. Lewis. They married in 1951 and raised a family of five who were the focus of her life.
The memories abound when we think of the amazing opportunities and inspiration she and Cecil gave their children. Whether it was camping at Kejimkujik, Sunday afternoons at the cabins in Ponhook and Robertson Lake, we were always together and bound for a new adventure. Ruth had a love of the outdoors, gardening – she saw beauty in the simplest of things like tiny flowers growing in her field, a passion for music , an eye for photography, Salvation Army, God and her family. Ruth and Cecil passed on their musical abilities to all their children and there was always a song or musical instrument playing in our home.
When we think of our mother, there are good memories to sustain us – Sunday afternoons in the back of the station wagon on the way to the cabin, singing hymns and songs on the way home to Liverpool where all our voices joined as one, rides in the antique cars and oddities, bike rides and walks all over Queens County and canvassing for the church. Ruth could be described as a private individual with a strong love of family values, her children and siblings. She was determined, resilient, created the “Charlie Brown Christmas tree” in our home, classy and made the best cocoa. She sometimes was a tough little egg to crack, but she always had your back. Family mattered and this quality was passed on to us all. When she disagreed at times, her little nose would go up and you knew the conversation was over. She did it her way!
She is survived by her daughters Deborah (Alex) Doggett and Holly (Philip) Smith, both of Hunt’s Point, Beth Stuart (Stephen Armstrong) of Tusket, Kim (Mark) Hachey of Italy Cross. Her son David (Louise) of Milton, Grandchildren Craig and Erin Doggett, Matthew, Nathan and Joel Smith, Raegan Stuart, Beverly and Abby Lewis. Great grandchildren Kennice, Kyleigh and Kathryn Doggett. Step grandsons Dan and Andy Stuart, Matthew and Isaac Hachey.
She was predeceased by her husband of 64 years Cecil, her sisters Gladys Ramey, Mabel Joudrey, Jean Ramey, Nell Heath, Violet O’Dell and Betty Spears. Her brothers Robert, Henry, Bill, Howard and Norman.
Cremation has taken place under the direction of Chandlers’ Funeral Home, Liverpool. Visitation will be Sunday, November 12, 2017 from 7 until 9 p.m. in Chandlers’ Funeral Chapel and where a celebration of Ruth’s life will be held Monday, November 13, 2017 at 11 a.m.. Reverend Karen Ohrt officiating. Reception to follow. Burial will be in Zion United Cemetery, Payzant Street, Liverpool. No flowers by request, donations may be made to Queens SPCA, Queens General Hospital Foundation or to the Alzheimer’s Society of Nova Scotia. Online condolences may be made to www.chandlersfuneral.com

Offer Condolence for the family of Lewis; Ruth E.