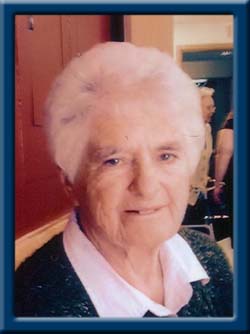 With sadness like no other, the family of Cora (Frail) Lewis announce her passing on December 4, 2015 with her daughters Lynn and Angela and youngest son, Danny, surrounding her with love as she drew her last breath.
Cora was the loving daughter of the late Malcolm and Dora Frail. Born in Westfield, Queens County on July 18, 1940, Cora was the oldest of three girls. Her sister Peggy passed away on December 9, 2014, leaving a hole in her heart nothing could fill. Ilene was Cora’s youngest sister and spent the afternoon with her on her last day on earth. In between Peggy and Ilene was Cora’s brother Melbourne; he did not see his first birthday, but Cora had memories of helping to feed and care for him.
Cora was married to Lorraine Lewis and they lived in Pleasant River, Queens County. Lorraine and Cora had four children: the eldest, Lynn, of Westfield, was married to Dana E. Murray who passed away on October 16, 2015. Cora loved Dana and called him daily, sometimes several times a day, to chat. Lynn and Dana had two children. Tracy of Wolfville, NS married to Bobby Ellis and Scott of Alberta. The second of Cora’s children is Grant. He, and his wife, Pam, live in Port Williams, NS and have a beautiful daughter Ellen who is studying in New Brunswick. Cora’s second daughter, Angela, lives in Chelsea, NS and is married to Mitchell Smith. Their son Dereck lives in Blockhouse, NS. The youngest of Cora’s children is Danny, who lives in Pleasant River, NS and he has five children. The oldest of Danny’s children is Holly, who lives in Halifax, NS along with her partner John. Holly has Cora’s great grandson, handsome little Ashton. Next we have Shelby “Shelb” of Halifax, NS and then Allison who also lives in Halifax with her partner Jamie. The youngest daughter is Jessica of Tantallon, NS who had Cora’s first great granddaughter, beautiful Aleah. The last of Danny’s children and truthfully, the apple of Cora’s eye is Wade. Wade has lived with Cora and Lorraine since he was a toddler and Cora loved him with a love like no other. He is a fine young man.
Cora was a daily fixture in these grandchildren’s lives. She loved these five like her own.
Lorraine kept Cora in her home and cared for her with help from his children and help for a short period from home care until it became impossible to do so. She moved to Roseway Manor in July of this year and all of Cora’s family would like to thank them for their excellent care. Then the family was very fortunate to have Cora move closer to home. In November, she moved to Queens Manor and was cared for by the wonderful staff there. Cora’s daughters, Lynn and Angela, would personally like to thank Marie Barnes for all the support and many hugs. Marie, you are a very special lady! To Dr. Blackadar, thank you for all of your help and support; you are a wonderful, compassionate being. To Renate Bennett, Cora loved you and you have been a great support to the family. Your help to Cora during her journey through and battle with Alzheimer’s disease was spectacular.!
Cremation has taken place with care and compassion by Chandlers’ Funeral Home, Liverpool, NS. There will be a celebration of Cora’s life on her birthday, July 18, 2016. Donations may be made in Cora’s name to North Queens Medical Centre.

Offer Condolence for the family of Lewis; Cora Belle