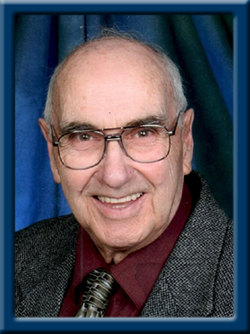 LEWIS – Cecil George, 86, of Liverpool, passed away peacefully in Queens General Hospital, Liverpool on Friday, July 29, 2016 surrounded by his loving family.
Born June 9, 1930 in Rexton, NB, he was a son of the late Mabel Hannay and Stuart MacGregor and the adoptive son of the late Aretus and Miriam (Penny) Lewis.
Cecil was known for always lending a helping hand, for his big smile and a wave of his hand. He loved his family, the outdoors, his time at the lake, a good book, and throughout his life, his many dogs. In high school, Cecil was involved in the youth band and Cadets. Cecil’s interest in vehicles led him to acquire his certification as a mechanic and he worked for Goodspeeds in Truro, Earl Whynot (White Rose/Shell) in Liverpool, Liverpool Chrysler Dodge, Cole Ford Sales and even operated his own business for a short time before moving on to work for Nova Scotia Power.
He is survived by his wife of 64 years, Ruth Ethel (Mouland); his daughters Deborah (Alex) Doggett and Holly (Philip) Smith, both of Hunt’s Point, Beth Stuart (Stephen Armstrong) of Tusket, Kim (Mark) Hachey of Italy Cross. His son David (Louise) of Milton, Grandchildren Craig and Erin Doggett, Matthew, Nathan and Joel Smith, Raegan Stuart, Beverly and Abby Lewis. Great grandchildren Kennice, Kyleigh and Kathryn Doggett. Step grandsons Dan and Andy Stuart, Matthew and Isaac Hachey. Half sisters Winnie (Fred) Wilson and Marsha MacDonald (Ken Cleary), both of West Branch, NB, Half brother John MacDonald of Jardineville, NB.
Cecil was predeceased by his half sister Flora Sullivan and his son in law Art Stuart.
Cremation has taken place under the direction of Chandlers’ Funeral Home, Liverpool. Visitation will be Monday, August 1, 2016 from 7 until 9 p.m. in Chandlers’ Funeral Chapel and where a celebration of Cecil’s life will be held Tuesday, August 2, 2016 at 11 a.m.. Reverend Karen Ohrt officiating. Reception to follow. Burial will be in Zion United Cemetery, Payzant Street, Liverpool. No flowers by request, donations may be made to Queens SPCA, Queens General Hospital foundation or to the Alzheimer’s Society of Nova Scotia. Online condolences may be made to www.chandlersfuneral.com

Offer Condolence for the family of Lewis; Cecil George