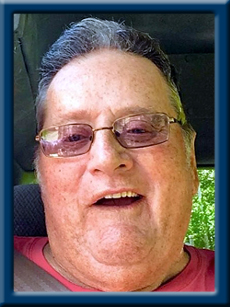 It is with great sadness that we say our final goodbyes to our loving husband, father, brother and best friend, Ross Allen Levy of Mersey Point, who passed away peacefully at home in his sleep on March 24th, 2019.
Born in Mersey Point, he was raised by his grandfather Ainsley Levy.
Ross, also known as “Roscoe” to some, was a private man who had a love for Ford cars and trucks, Harley Davidson motorcycles and anything mechanical. Ross also had a passion for the outdoors and animals, especially horses. He loved to go to horse pulls but never competed with his own. He would spend hours just sitting in the barn smoking his pipe watching them eat. Nothing made him happier than going in the woods, cutting down trees and yarding them out with his horse. One horse in particular named Jim was bought from a farmer friend in the valley and was his absolute pride and joy. Just mentioning his name would bring a smile to his face. His love of horses and “the old way of doing things” was a way of life for him. The work once done by horses eventually gave way to tractors but the horses were always kept around as pets as well as cattle, pigs, chickens and goats.
He had an uncanny ability to show that his way of doing things was usually the right way. His tough love and old school approach was exercised often but was always for good intent. Despite his sometimes rough exterior and tell it like it is attitude, Ross had a huge heart and an obvious weak spot for children. He wasn’t someone who did things for fame and glory as he was never one for being in the spotlight. He was an honest man and cared very much for the people he loved and who loved him. If you had his respect, you had a friend for life.
As a young boy he left school early to work in the hay fields for Herb Tarr and team oxen around the farm. Some years later he started his own trucking business which involved hauling road salt from Pugwash or hauling asphalt for Aberdeen Paving. He was no stranger to hard work, usually working from daylight to dark 6 days a week while Sundays were spent servicing the trucks for the following Monday. It truly was a labor of love for him. In 1978 Ross became employed with the Department of Transportation as a heavy equipment operator while continuing to run his own business. Towards the end of his 22 year career with the D.O.T, heart problems had forced him into an early retirement. Then in 2012, a stroke had furthered his already declining health leaving him paralyzed and unable to communicate for the next 7 years but somehow he always found a way to keep going. He was a hard working man trapped in a body that no longer worked but he pushed on doing whatever he could with what he had left. There were some hiccups along the way but his determination to fight kept him going long past doctors expectations. Ross stayed a resilient fighter even when the odds were stacked against him.
Ross was proud but humble with his accomplishments he had made in his life. Not only was he a self taught quick learner but he also had a knack for doing just about anything. He never gave up, especially when faced with illnesses that he constantly battled through everyday. It’s that strength, love and perseverance to see his challenges through to the end that will be the stepping stones for which he will always be remembered and dearly missed. May you now rest easy knowing that your battle is over and be at peace knowing that someday we will be together again. You fought a long hard fight and we wouldn’t have expected any less. We love and miss you Dad. You will always be in our thoughts and will continue to be our hero. Until we meet again….
Ross is survived by his companion of 47 years Marilee Weagle; his daughter Tammy, his son Kristopher; his step daughters Karen George, Karla (Kendall) Colp and step son Kevin Weagle. His grandchildren Ashley and Tanner George, Kennedy Colp, Cody Whalen and Aaron Weagle. His brothers David, Michael and Eugene.
Ross was predeceased by his sister Rosalind Warrington and his brother Roy.
Cremation has taken place under the direction of Chandlers’ Funeral home, Liverpool. At Ross’ request, there will be no funeral service. No flowers, donations may be made to Queens Branch of the S.P.C.A, Heart and Stroke Foundation of Nova Scotia or the IWK. Online condolences may be made to www.chandlersfuneral.com.
A special thanks to Dr. Woodford, Paramedics and the nursing staff at Queens General Hospital for their care during Ross’ stays at the hospital.

Offer Condolence for the family of Levy; Ross Allen