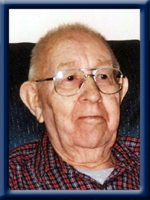 LEVY – Howard Wesley, 98, of Liverpool, departed this life on November 9, 2014 in Queens General Hospital, Liverpool.
Born September 27, 1916, in Mersey Point, Queens County, he was a son of the late Wesley and Nora (Baker) Levy.
Howard was a strong Christian man and a member of the Liverpool United Baptist Church. He had served as a deacon, was a member of the Men’s Choir, and was very involved with the Church over the years. He worked at Steel and Engine Products Limited (STENPRO) for 40 years and retired as foreman in the Engine Division. He was an accomplished mechanic, carpenter and gardener. His successful vegetable gardens and beautiful flower gardens spoke of his gardening skills. He always said that he did the planting, God did the growing.
The young Levy family enjoyed many camping trips around the Maritimes, with a tent as their only accommodation and it was really “roughing it” in those days. Years later, Howard and Dolly upgraded to a travel trailer and continued camping but in style and more comfort. After Howard’s retirement, he and Dolly continued travelling with Bermuda being their favorite destination. Howard was a kind and generous man and was well known for doing things “his way”. He leaves many memories of a long and well-lived life for his family and friends to cherish.
Howard is survived by his daughter Isabel (Chris) Inness of Charleston, his son Archie (Carolyn) of Mission, Texas (winter home), grandsons Curtis (Gayle) Levy of First South, Graham Levy (Jen Hubley) of Halifax, Jason Oickle (Jen Reid) of Halifax, half sister Ruby (Eric) Davis of Mersey Point, step sister Madeline Walker of California, step brother Clayton (Betty) Sawler of Port Hawkesbury, nieces and nephews.
Besides his parents, Howard was predeceased by his wife Doris “Dolly” (Douglas) ,infant sisters Pauline and Olive, sisters Dorothy Boland and Lottie Levy, brothers Sinclair and Arnold, step-mother Gladys and step-sister Blanche Taylor.
There will be no visitation. A celebration of Howard’s life will be held Thursday, November 13, 2014 at 2:00 p.m. in Liverpool United Baptist Church. Reverend Dr. Steven Hopper officiating. A private family interment will be held in the Liverpool United Baptist Cemetery. No flowers by request, donations may be made to the Liverpool United Baptist Church. Online condolences may be made to www.chandlersfuneral.com.

Offer Condolence for the family of Levy; Howard Wesley