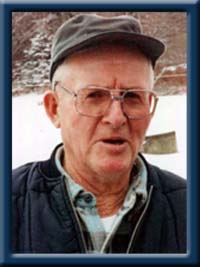 LEVY – Harvey Dewitt,  97, of Mersey Point, Queens County, passed away peacefully in Queens General  Hospital, Liverpool on Sunday, August 19th, 2012, with his family by his side.

Born on Little Tancook island, he was a son of the late Ainsley and Celestia (Cross) Levy.

Harvey worked for Bowater Mersey Paper Company Limited as boss aboard the boom boats floating logs down the Mersey River to the mill. He retired in 1976 after 34 years. Outside the mill, Harvey was a lobster fisherman and fished up until his retirement at the age of 94.

He was predeceased b y his wife Emma (Mason); sisters Evelyn, Ena, Jean, Gladys and Maude in infancy and his brothers Leslie and Ralph.

Visitation will be Tuesday, August 21st, 2012 from 7 until 9 p.m. and funeral service will be Wednesday, August 22nd, 2012 at 2:00 p.m. both in Chandlers’ Funeral Chapel, Liverpool, Reverend Judy Cross officiating. Burial will be in Zion United Cemetery, College Street, Liverpool. Family flowers only, donations may be made to any charity. Online condolences may be made to www.chandlersfuneral.com

Offer Condolence for the family of Levy; Harvey Dewitt