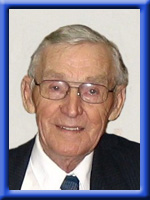 MacDonald, Leslie, 96, of Port Joli, Queens County, passed away Thursday, November 4th, 2010, in the Queens General Hospital, Liverpool, with his family by his side.

Born in Sandy Bay, he was a son of the late John and Grace (Decker) MacDonald.

Visitation will be held Sunday, November 7th, 2010, from 7-9 p.m., and a Funeral Service will be held Monday, November 8th, 2010, at 11:00 a.m., followed by a reception, both from Chandlers’ Funeral Home, Liverpool. Reverend Bethe Benjamin – Cameron officiating. Burial will be in Port Joli Cemetery. Donations may be made to the Port Mouton United Church or to the charity of your choice. Online condolences may be made at www.chandlersfuneral.com

Offer Condolence for the family of MacDonald; Leslie