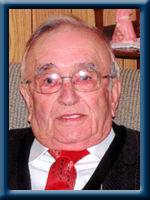 Born in Eagle Head, Queens County, in 1936, he was a son of the late Clayton and Myrtle (Munroe) Leslie.

George spent time in Sydney, Cape Breton and Halifax during his youth before leaving home at the age of 17 to join the RCAF. He spent 8 years in the service and was stationed in Gimli, Manitoba where he met his first wife (Thorbjorg Louvisa “Thora-Lou”) and mother of his three sons. He moved his family back to Nova Scotia in 1967 to the town of Port Hawkbury in Cape Breton where he worked a variety of jobs and business ventures. In 1982, he moved once more, this time it was back to his home of Eagle Head. It was here that he lost his first wife, Thora-Lou, who passed away due to prolonged illness.

George was a devoted Christian in later life when he met his second wife, Ruby, who shared his passion for spreading the Lord’s word. He was occasionally a lay preacher for several local churches and taught Sunday school. Ruby was supportive of him while he wrote his book called “The Simple Truth” which chronicles his life and beliefs and the event that changed his life and made him the believer in Jesus Christ that he was.

George was predeceased by his siblings, Edith, Wilfred, Wallace and Clayton.

George (Grampa) will be greatly missed by all of his loved ones.

Cremation has taken place under the direction of Chandlers’ Funeral Home, Liverpool, NS. A graveside memorial service will be held on Wednesday, April 7th, 2021 at 2:00 p.m. in Beach Meadows Community Cemetery, Beach Meadows. Reverend Fred Carr officiating. No flowers by request, donations may be made to the Highway Pentecostal Church, Liverpool, Queens County V.O.N. or to a charity of your choice. To share memories or condolences, please visit www.chandlersfuneral.com. COVID-19 precautions will be in place. Please bring a mask, social distance where possible and provide contact tracing information.

“Wait on the Lord; be of good courage and He shall strengthen thine heart; wait, I say, on the Lord”

Offer Condolence for the family of Leslie; George Anson