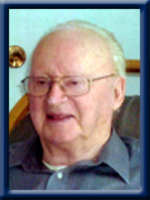 Cyril lived all his life in his beloved Port Mouton. He had his own family painting business for over 50 years retiring in his late sixties. He loved it when a government lighthouse needed to be painted because it brought him closer to his passion of the sea. In the off season when he was not painting, he was in Port Mouton Bay catching lobsters. After his retirement, he and his second wife, Mary, traveled to British Columbia to visit his sister and they traveled on many other road trips throughout Canada, visiting numerous provinces, visiting relatives and friends and having many adventures along the way. Dad lived a long and happy life, did all that he wanted and now is at peace.

He was predeceased by his first love, his wife of 46 years, Madge (Winters).

Visitation will be Tuesday evening (July 9th, 2013) from 7 until 9 p.m. and funeral service will be Wednesday, July 10th, 2013 at 2:00 p.m., both in Chandlers’ Funeral Chapel, Liverpool. Burial will take place at a later time in Laurel Hill Cemetery, Port Mouton. Family flowers only, donations may be made to Queens General Hospital New Addition or to a charity of your choice. Online condolences may be made to www.chandlersfuneral.com

Offer Condolence for the family of Leslie; Arthur Cyril