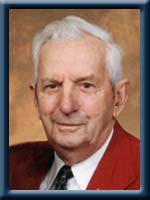 A veteran of World War II, Percy served as Craftsman, R.C.O.C. in England, Holland, Belgium, France and Germany and was discharged home September 1946. He married Vivian Esther Zwicker, Greenfield, Queens County, NS and settled there where he built his own home. He was a former owner of the Medway River Rural Telephone Co. until 1963 when he commenced work at Bowater Mersey. He retired from Bowater as a carpenter millwright in 1982, but continued to remain active in the community and his woodlands. He was a founding and honorary life member of the Greenfield Fire Department, a member of the Greenfield United Baptist Church, former treasurer of the Greenfield United Baptist Church Cemetery and Pine Rest Cemetery, a member of Zetland Lodge #9, A.F. & A.M., a life member of the Royal Arch Masons Rossignol Chapter #6, Antiquity Preceptory No.5 K.T., Philae Temple, Halifax and the Mersey Branch #38, Royal Canadian Legion, Liverpool as well as former president of the Veterans Club.

He was predeceased by his twin daughters Maxine and Maureen, sisters Thelma Leneten and Inez Brideau and brother Horace.

Offer Condolence for the family of Lenethen; Percy Owen