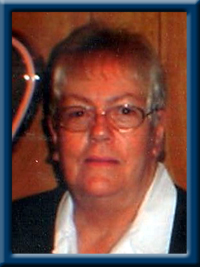 LEGGE – Sylvia Janice, 77, of Million, Queens County, passed away peacefully in Queens General Hospital, Liverpool, on Tuesday, June 16, 2015.
Born in Brooklyn, Queens County, she was a daughter of the late Walter and Doris (Meisner) Baker.
Sylvia was a former clerk for Seaman’s Store. She loved to pickle and preserve and was a member of Arbutus Chapter #30, Order of the Eastern Star, Milton.
She is survived by her husband Robert, her son Ashley of Milton, grandchildren Robert (April) Legge of Liverpool, Patricia (Hayward) Adams of Oakland, great-grandchildren Aydan, Ashley and Ander Adams, Georgia Legge, sister Helene Soule of Victoria, BC, brother Chester of Brooklyn.
She was predeceased by her sisters Aletha and Jessie and her brother Valton.
Cremation has taken place under the direction of Chandlers’ Funeral Home, Liverpool. A private family graveside service will be held at a later date. No flowers by request, donations may be made to Canadian Cancer Society. Online condolences may be made to www.chandlersfuneral.com

Offer Condolence for the family of Legge; Sylvia Janice