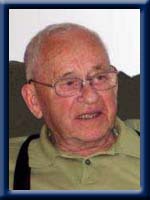 Born in Milton, he was a son of the late Frank and Winnifred (Emeneau) Legge.

Arthur was a former employee with Steel and Engine Products Limited (STENPRO), Liverpool working as an electrical Foreman for 29 years until his retirement. He enjoyed the outdoors and will be fondly remembered for his very particular and meticulous workshop and woodpiles, his funny sense of humor and his “one liners”, as well as being a nice guy and “good Grampie”. He loved watching baseball and the Blue Jays as well as spending time with his family on picnics at Ten Mile Lake, Beach Meadows and Keji. He was a wonderful cook especially with the barbeque.

He is survived by his daughter, Yvonne (Charles) Robar of Newcombville, his granddaughters, Angela of Bridgewater and Nancy (Paul) McLaughlin of Forest Glen. His great-grandson, Charlie McLaughlin. His sisters, Phyllis Hubley of Queens Manor and Barbara Thorbourne of Liverpool.

He was predeceased by his wife Mildred (Lowe), his daughter Teresa, his sons Frank and Tracey and his brother John.

The family will receive friends from 10:00 until 11:00 a.m. on Tuesday, July 24th, 2012 in Chandlers’ Chapel, Liverpool followed by a funeral service at 11:00 a.m.. Reverend Corey Pickens officiating. Burial will be in Milton Community Cemetery. No flowers by request, donations may be made to Queens Manor, Liverpool. Online condolences may be made to www.chandlersfuneral.com

Offer Condolence for the family of Legge; Arthur William