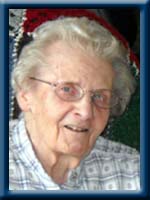 Born in Melton Mowbray, England, she was a daughter of the late Clifton and Lucy (Creamer) Richardson.

At the beginning of the Second World War, Gladys served in the Royal Armed Services. She, along with her husband, Bill, and young family immigrated to Canada in 1957 where they settled in Quebec. In 1981, they moved to Nova Scotia. Gladys will be fondly remembered as a full time “Mum” who enjoyed doing crafts and teaching them to others.

She is survived by her daughters Linda (Roland) Simpson of Australia, Vivienne Hilary Montague of Toronto, her son John (Pam) of Calgary. her grandchildren Michael, Paul, Catherine, Tyla and Chelsea and her great grandchildren Xavier, Ella, Aaron, Jai and Kayden, her sister Lucy Roberts of England.

She was predeceased by her husband Bill, her sisters May, Ivy, Daisy and Millicent and her brothers David and Clifton.

Offer Condolence for the family of Lees; Gladys