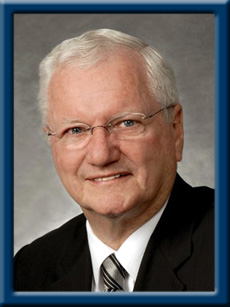 John graduated from Saint John High in 1961 and attended the University of King’s College, graduating in 1966 with a Bachelor of Arts. In 1968 he earned his Bachelor of Education from the University of New Brunswick. He completed his Master’s in Education and History at Dalhousie University in 1970. After teaching in Saint John and Halifax schools for 5 years, he and Nancy moved to Liverpool in 1970 where he was the head of the Social Studies Department at Liverpool Regional High School until 1980. He worked for the Queens District Schoolboard as Assistant to the Curriculum Supervisor from 1981 to 1983.

From September 1978 to June 1999, John proudly represented the residents of Queens County in the Nova Scotia Legislature, winning 6 consecutive elections. He served as the Deputy Speaker of the House from 1981 to 1983 and held 3 portfolios as a member of the Executive Council including Minister of Fisheries (1983 to 1988), Minister of Environment (1988 to 1991) and Minister of Natural Resources (1991 to 1993). John served as the President of the Canadian Council of the Ministers of the Environment from 1991 to 1992. He served as Government House Leader in 1991, Chairman of the Public Accounts Committee in 1993 and as a member of the opposition from 1993 to 1999. After retiring from provincial politics, he served as the Mayor of the Region of Queens from 2000 to 2012. During his time in the Legislature and municipal government, he was a strong advocate for setting aside lands for preservation and the protection of species-at-risk and played a pivotal role in the creation of Thomas Raddall Provincial Park, Kejimkujik Seaside (Parks Canada) and nomination of Shelburne River as a Canadian Heritage River. John was also instrumental in the construction of Emera Center and South Queens High School and was a strong supporter of the Queens General Hospital.

In 2002 he was granted the degree of Doctor of Civil Law by the University of King’s College where he was formerly a member of the Board of Governors. In 2010 the Tourism Industry of Nova Scotia presented John with the Ambassador Award for his support of the tourism industry. In February 2012, John was proud to be appointed Honorary Colonel of the West Nova Scotia Regiment. He was the recipient of the Canada 125, Queen’s Golden Jubilee and Queens Diamond Jubilee decorations.

John loved sailing, camping, and gardening, but most of all he loved spending time with his wife, children and their spouses, and his grandchildren. John loved Queens County and its residents and was proud to have lived in and served the community for 50 years.

The family would like to express their thanks to the Doctors and Nursing Staff of Queens General Hospital for the exemplary care he received during his time there. A special thank you to his family physician Dr. Gary Ernest for his care and support.

Cremation has taken place under the direction of Chandlers’ Funeral Service, Liverpool. Visitation will be held on Tuesday, July 19, 2022, from 1:00 pm until 4:00 pm and 6:00 pm until 9:00 pm, from Chandlers’ Funeral Home, 91 Union Street, Liverpool. A memorial service will be held at 11:00 a.m. Wednesday, July 20th, 2022 at Trinity Anglican Church on Church St. in Liverpool. Reverend Cherry Workman officiating. In lieu of flowers, the family asks that donations be sent to the Queens General Hospital Foundation or Trinity Anglican Church. To share memories or condolences, please visit www.chandlersfuneral.com

Offer Condolence for the family of Leefe; John Gordon