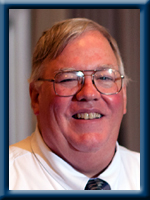 LEDVINA – Timothy J., 66, of Western Head, Queens County, passed away peacefully in his sleep on Monday, March 2, 2015 in Queens General Hospital, Liverpool.
Born in Cleveland, OH, he was a son of the late James and Corrine (English) Ledvina.
After earning a Bachelor of Science degree in mechanical Engineering from Ohio State University in 1971, Tim began a very successful career with the Morse Chain Corporation, a division of Borg Warner in Ithaca, NY. An expert on power transmission chains, he became Chief Engineer for Morse Chain and was responsible for over 30 patents. Discovering Nova Scotia during several summer vacations, he and his wife, Diane, decided to build the home to which he would retire in Liverpool. Once the home was completed in 2006, he spent as much time there as possible, applying for permanent immigrant status in 2009. He retired from Borg Warner in 2010 and moved to Liverpool full time. He was a lover of all living things, numbering cats, dogs and miniature donkeys among his pets over the years.
Tim rarely met a person he didn’t like. He was generous with his time and energy and became invested in his new community. He was active in St. Gregory’s Catholic Church, the Kiwanis, his homeowners association to name just a few. A veteran of firemen’s breakfasts and quiz night at the pub, he relished his new friends and surroundings and became a Canadian citizen in 2014.
He is survived by his twin brother Tom (Patricia) of Alexandria, VA., half brother James Mangan of Fairview Park, OH. and a host of nieces, nephews and friends in the community where he will be greatly missed.
He was predeceased by his wife Diane (Carley) in 2012.
Cremation has taken place under the direction of Chandlers’ Funeral Home, Liverpool, where visitation will be held Thursday, March 5, 2015 from 7 until 9 p.m. and prayers being said at 8:00 p.m.. Funeral mass will be Friday, March 6, 2015 at 11:00 a.m. in St. Gregory’s Catholic Church, Liverpool. Father Keith Billard officiating. Family flowers only, donations may be made to Queens General Hospital Foundation or the American Cancer Society. Online condolences may be made to www.chandlersfuneral.com.

Offer Condolence for the family of Ledvina; Timothy James