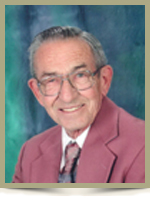 Born in Milton, he was a son of the late William H. and Gertrude (Wentzell) Leaman.

He was predeceased by a daughter, Janet; grandson, Daniel; brother, William “Bud”.

After graduating from the Milton School, he attended Halifax Vocational School. He worked as a mechanic for George Milford Ltd and then as service manager for Milford’s and later at T&C Pontiac Buick / Liverpool Chrysler Dodge. During his time as manager he was awarded a No. 1 Provincial and Canadian Service Award, as well as many other service awards. He also taught WOW (Woman on Wheels) Course, which he enjoyed so much, helping women care for their cars. In his younger years he was an avid hunter and fisherman, especially enjoying his time with his father and son. Gerry was an active community member and served for a number of years on the board of Milton Community Association, was a driver for Meals on Wheels and he also volunteered at the local food bank. He was a past member of the Liverpool Golf Club, Lions Club and Masonic Lodge. Being a passionate person about his faith, he served on many committees in the Milton Christian Church, including being a deacon and then as an elder. He and Phyllis enjoyed many years of travel and spent many winters in Florida. He was an extremely pleasant, patient, happy man, always with a smile, so devoted to his wife and family and much admired by his co-workers. He will be missed by his loving dog Candy.

A celebration of Gerry’s life will be held at 2:00 p.m. on Sunday, December 7th, 2014, from Chandlers’ Funeral Home, Liverpool, followed by a reception. Pastor Russell Prime officiating. Family flowers only. Donations may be made to the Milton Christian Church or to Queens General Hospital Foundation. Online condolences may be made to the family at www.chandlersfuneral.com

Offer Condolence for the family of Leaman; Gerald Everett