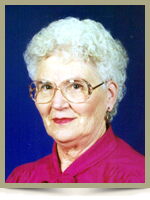 LAWSON — Amy Belle (Hupman), 84 of Summerville Centre passed away peacefully in her sleep on Saturday, July 27th 2013 after a long battle with ALS – Lou Gehrig’s Disease.

Born July 1st, 1929, she was the daughter of the late Aubrey and Mildred (Davis) Hupman and lived all her life in her beloved community of Summerville.

Amy was an educator by vocation and by nature. She attended Teacher’s College and taught in one room school houses throughout the 1950’s and at Port Mouton Consolidated School through the 60’s and 70’s. She returned as a teacher’s aide in the 80’s and was a tutor to local children throughout her career. Amy was also a genealogist and writer. She has written a history of her local church, the local cenotaph in Port Mouton and two thorough volumes of Hupman family history going back to the mid 1700s. She also took on a labour of love in reproducing the columns her mother Mildred wrote for the Liverpool Advance in a book called “Diary of a Village“. She was a tireless worker for her Summerville Christian Church, a volunteer for decades at The Queen’s Manor and has worked on many boards and local charities. She devoted her life to the education and betterment of children and her community and touched countless lives young and old through her long and productive life. Amy led by example and was a study in courage, compassion, and determined and rigorous intelligence

She suffered many losses in her later life and was predeceased by her parents Aubrey and Mildred, her husband of 41 years Murray in 1992, her beautiful granddaughter Amy in 2008, her beloved son Ronald in 2010 and younger sister Betty in 2012.

Visitation will be Wednesday evening (July 31th, 2013) from 7 until 9 p.m. at Chandler’s Funeral Home and funeral service will be Thursday, August 1st, 2013 at 2:00 p.m., at Summerville Christian Church. Reverend Neil bergman officiating. Burial will take place at in Laurel Hill Cemetery, Port Mouton. Family flowers only. Donations may be made to Summerville Christian Church, The ALS Society or to a charity of your choice. Online condolences may be made to the family at www.chandlersfuneral.com

Offer Condolence for the family of Lawson; Amy Belle (Hupman)