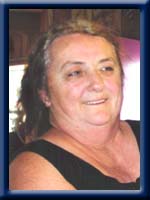 Born in Liverpool, she was a daughter of the late Arthur “St. Clair” and Audrey (Whynot) Nauldrett.

Diane was an animal lover who had, and looked after, many pets throughout the years. She enjoyed visits with her family and many friends and listening to music.

She was predeceased by her husband Enos “Rickey”.

Visitation will be held on Tuesday, August 14th, 2012, from 7-9 p.m., and a Funeral Service will be held on Wednesday, August 15th, 2012, at 11;00 a.m., both from Chandlers’ Funeral Home, Liverpool. Reverend Judy Cross officiating. Burial will be in the Southwest Port Mouton Community Cemetery. No flowers by request, donations may be made to the Queens Branch of the SPCA. Online condolences may be made to the family at www.chandlersfuneral.com

Offer Condolence for the family of Lavender; Diane Patricia