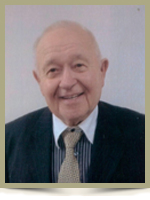 Born in Berlin, Germany, he was the son of the late Erna Laurinat.

Ernst immigrated to Canada in 1956. He was first employed at DeHavilland Aircraft, in Toronto. After relocating to Nova Scotia, he worked at Major Vending in Dartmouth, before finally moving to Beach Meadows, where he drove bus for the Community College. Later he was employed as a custodian/ supervisor at the former Liverpool Regional High School until he retired in 1994. He loved music and played in the Bowater Mersey Band. Ernst was an active Jehovah’s Witness for 47 years.

He was predeceased by a grandson Timothy Oickle.

Cremation has taken place under the direction of Chandlers’ Funeral Home and Cremation Service, Liverpool. A Memorial Service will be held on Saturday, April 5th, 2014, at 2:00 p.m., in the Kingdom Hall of Jehovah’s Witnesses, Old Port Mouton Road, Liverpool. Donations may be made to the Kingdom Hall of Jehovah’s Witnesses, Liverpool, to the Queens County Branch of the S.P.C.A. or to a charity of your choice. Online condolences may be made to the family at www.chandlersfuneral.com

Offer Condolence for the family of Laurinat, Ernst Erich