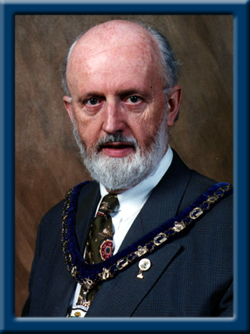 After 83 remarkable years, the life of Ronald Leslie Lane came to a close on August 14, 2016 surrounded by his loving family. Born April 8th, 1933 in Massachusetts, he was raised and spent most of his life in Liverpool, Nova Scotia, where he lived a life devoted to family and community. In his early years, Ron was an accomplished King Scout and enlisted in the Royal Canadian Air Force in 1951. His postings included Goose Bay, Yellowknife and Whitehorse. In 1954 he met and married the love of his life, Carol Algee. While posted in Germany, Carol and Ron began their family of nine children. In 1962, he moved his young and growing family back to Liverpool to operate the family business, now Lane’s Privateer Inn, which is still family run today.
Ron was strongly committed to community service. He served as Mayor of Liverpool from 1985 to 1996, and co-led the first voluntary municipal amalgamation in Nova Scotia. He had extraordinary volunteer involvement including President of the Tourism Industry Association of Nova Scotia, serving as District Governor for Nova Scotia Lions, and was President of the Nova Scotia School Board Association and the Canadian School Trustees Association. He was a proud member of Legion Branch #38. The recipient of innumerable awards, he said “much can be achieved if you listen first, respect the opinions of others, and pursue realistic goals.”
Ron was a champion of local culture. He was president of the Astor Theatre Society and rarely missed a live performance. A founder and ongoing enthusiastic supporter of Privateer Days, often seen wearing his 18th century costume in the annual parade. He met with Hank Snow in Tennessee, helping to secure donations of memorabilia for the Hank Snow Centre. He loved to travel and his work with provincial and national organizations allowed him to represent his province and country in Japan, Switzerland, Greece and much of Canada and the United States.
In his later years, he lovingly cared for and supported Carol through her illness. Always living with determination, he completed his high school diploma at the age of 79. Ron will be remembered for his remarkable story telling, his enthusiasm for life, his devotion to family, his humour, warmth and mischievousness twinkle in his eye.
Ron was predeceased by his parents, Edgar and Helen (Clow) Lane, and his siblings, Frederick, Edgar and Rosemary Dumais. He is survived by his sister Bettyann (Fred Jennings), his children, Catherine, Joan (Pam Richer), Debbie (David Lingley), Paul (Kelly Snow), Terrance, Anne Marie (Doug Jonah), Susan, Sheila (Geoff Day), Linda (Andrew Bursey), his grandchildren, Brian, Maggie Lingley and Max Lingley, Justin and Daron Yarn, Malcolm and Caroline Jonah, Luke and Neil Van Horne, Lily Lane, his great-grandson Eli Yarn.
A visitation and Legion Service will be held at Chandler’s Funeral Home on Thursday August 18, 7-9 pm. Funeral service will be held in Saint Gregory’s Catholic Church on Monday, August 22, 2016 at 11:00 a.m. Father Charles Offor officiating. A private family committal will be held at a later time. A celebration will follow at Lanes’ Privateer Inn. Family flowers only, donations may be made to the Queens Manor, Liverpool Lions Club, CNIB or a charity of your choice. Online condolences may be made to www.chandlersfuneral.com. The family would like to thank the staff of Queens Manor for their kindness, care and support for the last four years.

Offer Condolence for the family of Lane; Ronald Leslie