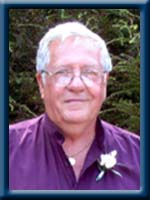 Born in Coffinscroft on March 25, 1941, he was a son of the late Arthur and Stella (Garron) Lamrock.

Larry worked in Ontario for a number of years and, upon his return to Nova Scotia, he worked at Scotia Marine in Woods Harbor. He then purchased his own  fishing boat from which he fished ground fish and lobster from Cripple Creek in Clam Point. In 1977, he and his family moved to Liverpool where he was Superintendant of the Queens County Correctional  Centre until 1990. After the Correctional Centre closed, Larry went to work at the new Liverpool Regional High School for a number of years retiring in 2003.

Larry was a former member of the IOOF in Barrington Passage, a former member of the Liverpool Lions Club as well as Mersey Branch #38, Royal Canadian Legion, Liverpool. Larry enjoyed hunting with his best friend, Lewis, trapping, fishing and reading, especially Louis Lamour books. He liked to play cards, especially crib and it gave him great pleasure to win. He and Marie, along with family and friends, traveled to Cuba, Mexico, US Virgin Islands, other areas of the USA, England and many parts of Canada. He took great pride in his property and spent many hours on his lawn mower. His main love was his grand daughter, Chennyne, whom he spent many hours showing her how to hunt and set rabbit snares.

He is survived by his wife of 45 years, Marie (Nickerson); his daughter Kim (Gary) Tanner of Wileville; his granddaughter Chennyne of Eagle Head/Wileville; step grandson Logan Tanner of Lunenburg, chosen grandchildren Brittany Conrad of Liverpool, Ava and Michael Frail of Beach Meadows, Thomas Hubley of Beach Meadows, and chosen great grand daughter, Jersey Conrad of Liverpool. All of whom were the “apples of his eye”. His sisters; Edith Lamrock of Coffinscroft; Mary (Earl) Presley of Barrington; Kathleen (Glendon) Blades of Oak Park, Shelburne County. His brother Donald of Coffinscroft. He is also survived by many other family members and numerous friends that were dear to him.

He was predeceased by sister Frances and brothers Karl and Harold.

Cremation has taken place under the direction of Chandlers’ Funeral Home, Liverpool where visitation will be Wednesday, February 20th, 2013 from 7 until 9 p.m.. Funeral service will be Thursday, February 21st, 2013 at 11:00 a.m. in Liverpool United Baptist Church. Reverend Steven Hopper (Hooper) officiating. Flowers from the immediate family only, donations may be made to the Canadian Cancer Society or the Liverpool United Baptist Church .  Online condolences may be made to www.chandlersfuneral.com

Offer Condolence for the family of Lamrock; Larry Kenneth